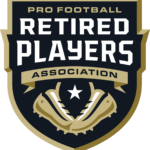 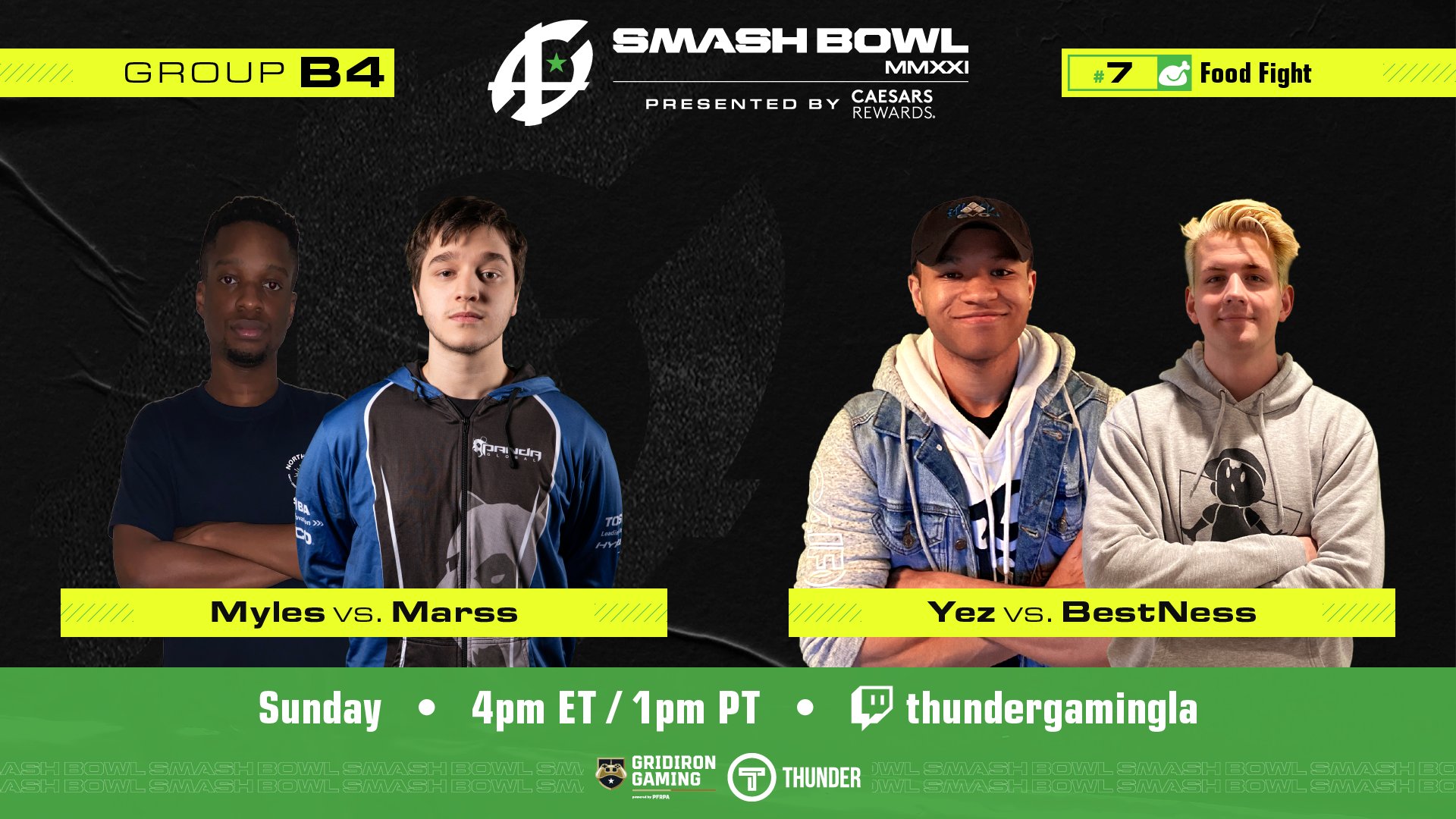 This past Sunday, the second stage of Smash Bowl MMXXI came to a close, so it’s time for another recap!

Group B4, the final group of Stage Two, played using the “Food Fight” ruleset, which used standard rules for character and stage picks. Each match was set to stamina mode with 80 HP health and food items, including the spicy curry and maxim tomato, on high.

The pool went as seeded, with both captains, Myles “Myles” McKenzie and Yezre’el “Yez” Askew advancing to the final stage through the winners’ and losers’ sides of Group B4, respectively. 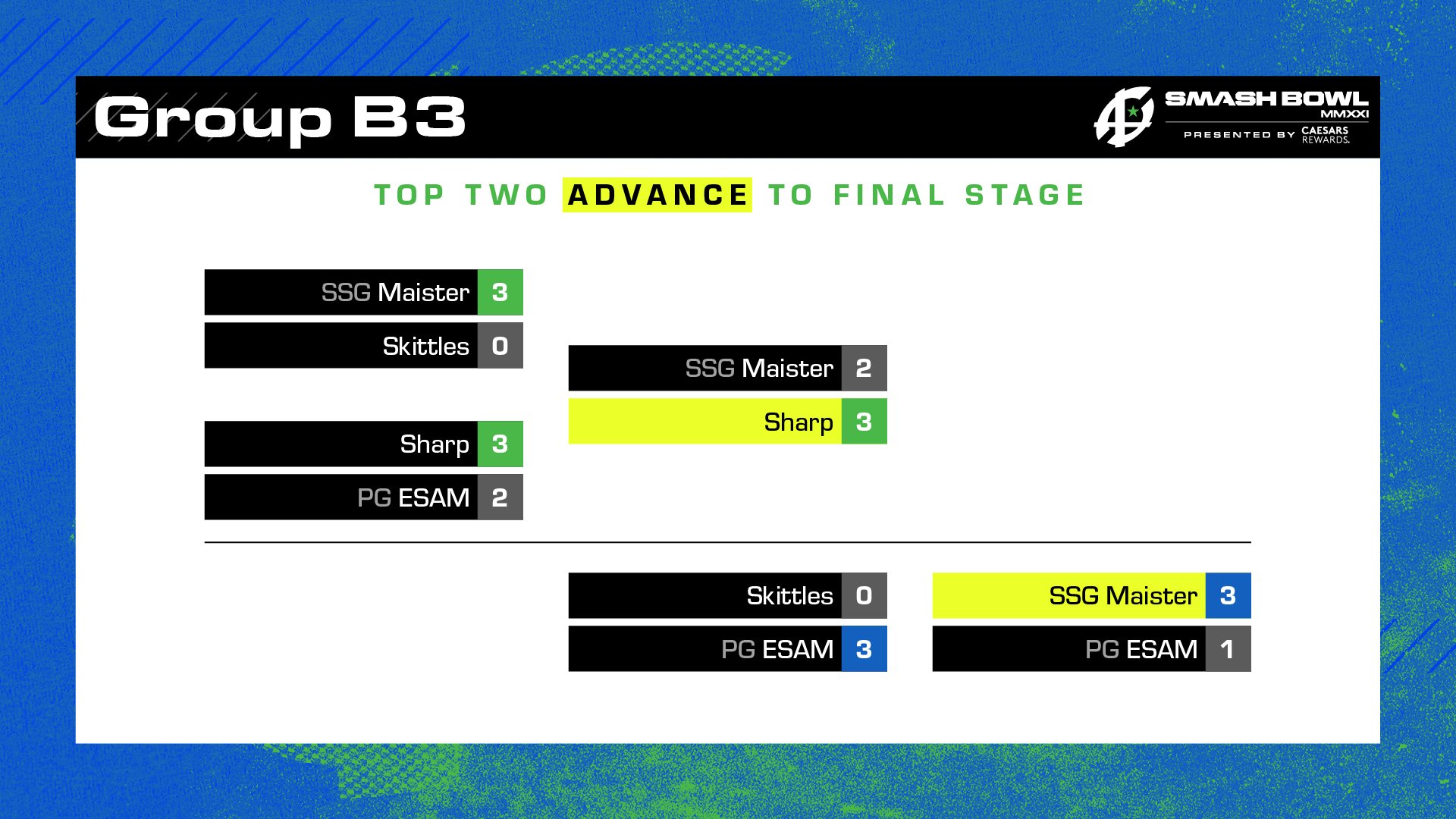 The first set of the group was between Myles and Tyler “Marss” Martins. Despite being known as one of the best Zero Suit Samus (ZSS) players in the world, Marss opted to use Hero during game one. This first match quickly showed the importance of non-traditional food items, like the curry and maxim tomatoes. The pace of the game was largely controlled by whoever could use the fireballs from the curry item most effectively, and the tomatoes gave players a huge advantage by healing them almost completely. This especially came into play during this first game where, after losing his first two stocks relatively quickly, Marss picked up four tomatoes to hold on to his last life long enough to even up the game. Yez was able to continue using the curry to his advantage and, after picking up a few tomatoes, he secured the first game.

Marss went with Sonic the next game, and their match was much closer. This time, Myles was the most consistent when it came to grabbing tomatoes, creating a deficit too large for Marss to make up during the final stock. Marss then switched to ZSS and had a dominant game three. However, Myles quickly adapted to the new character and won the entire set with the next game, advancing him to the winners’ finals.

On the other side of the bracket, Yez played against Spencer “BestNess” Garner. Despite his name, BestNess chose Piranha Plant against Yez’s signature Ike. BestNess used Piranha Plant’s poison clouds, combined with the spicy curry item to deal massive amounts of damage extremely quickly. He won game one after using tomatoes to prolong his stock while tacking on damage slowly using his character’s long range. Yez started the next game with a short combo into an up special, killing off both players and putting them at two stocks each within the first few seconds. However, this didn’t give Yez the momentum he needed, and BestNess quickly took control and won the second game. For game three, Yez counterpicked BestNess to Battlefield and used the top platform to escape from Piranha Plant’s large attacks. The plan worked out for most of the game, but BestNess began to play around the edge of the stage rather than the center, which forced Yez to approach him. Despite his percent falling to single digits several times, he was able to heal to nearly maximum health every time and hold on to his stock long enough to secure his 3-0 win thanks to a few lucky tomatoes.

In his match with Myles, BestNess started by employing the same strategy of staying near the edge of the stage. However, Myles refused to let BestNess control the pace of the match, and didn’t challenge him near the edge. Instead, Myles focused on maintaining stage control and getting weak hits that led to higher damaging combos, earning him the first game. In the next game, Myles realized that the stamina mode knockback adjustments allowed him to perform some of Yoshi’s heavy-weight combos for much longer than normal. He quickly took the first two stocks of game two off of only a few openings. BestNess realized his strategy wasn’t working, and he started focusing on picking up items and controlling the stage rather than the ledge, turning the match around with a three-stock comeback and tying up the score. Game three started similarly, with Myles quickly closing out stocks off of a few hits. BestNess started mounting a similar comeback, but Myles was able to hold down the stage and keep him away from any tomatoes, giving him a 2-1 score lead. In game four, BestNess started to jump and control the space above the stage. While this let him get openings on Myles by falling with aerial attacks, it also put him off the ground and away from the items. Myles had total control over the item spawns and took the game using pressure from the spicy curry item and emergency heals from tomatoes, advancing him to the Smash Bowl’s final stage.

Yez went with Hero instead of his signature Ike in the losers bracket, much like Marss did in his set against Myles. Similar to that set, the Hero didn’t work out, and Marss took the first game with a two-stock lead. In game two, Yez made a more characteristic pick with Ike. Surprisingly, Marss had even more control in this game, especially when he had the spicy curry item, which let him escape Ike’s up-special attacks. In game three, Yez made another character switch, this time to Wolf. He made use of Wolf’s reflector to counter the fireballs from the spicy curry. This move, combined with some accurate predictions of Marss’ strategy, put Yez on the board. During game four, Marss picked Battlefield and tried to use the platforms to escape from Yez whenever he ate curry. Yez was prepared for this and met him in the air with his own attacks. When Marss tried to run away on stage instead, Yez used Wolf’s side special to close the distance and keep applying pressure. After bringing Marss down to his final stock, Marss self-destructed, tying the set up 2-2. In the final game, Marss switched to Mega Man, but Yez’s strategy of using Wolf’s reflector and applying pressure with curry proved even more effective. He won the set with a reverse 3-0.

In the losers’ finals, Yez didn’t waste any time with his character picks and stuck with Wolf. He started the game by losing a stock to BestNess’ Piranha Plant and then immediately self-destructing, putting himself at a two-stock deficit. While he started to make a comeback, BestNess’ use of the poison cloud and spicy curry item made it far too difficult, and Yez lost the first game. Yez took control of the second game, taking the first stock and maintaining his lead. BestNess began to mount a comeback, but after picking up two curries in a row, Yez took the momentum back and tied up the set 1-1. For game three, BestNess switched to his namesake character for the first time. He immediately used Ness’ down special to absorb curry damage and stay alive for much longer than usual. Yez adjusted to this and focused on damaging Ness with combos rather than curry. Despite another self-destruct, Yez took game three using his new strategy. During game four, both players adapted to each other’s plans and traded stocks back and forth. A third self-destruct from Yez gave BestNess the game, bringing the set to a game five.

The fifth game told a different story than the rest of the set. Yez took two quick stocks, and rather than avoiding the curry, he focused on using it to bait BestNess into using his down special. While it let BestNess absorb the curry damage and heal, Yez used the down special’s long recovery animation to start combos that led to full stocks. BestNess caught on to this too late and lost the set after taking only one stock, advancing Yez to the Final Stage of Smash Bowl MMXXI.

With the conclusion of Stage Two, the Final Stage of Smash Bowl MMXXI is upon us. Next week, the eight remaining players will compete for supremacy in the long-awaited conclusion of this three-month event. 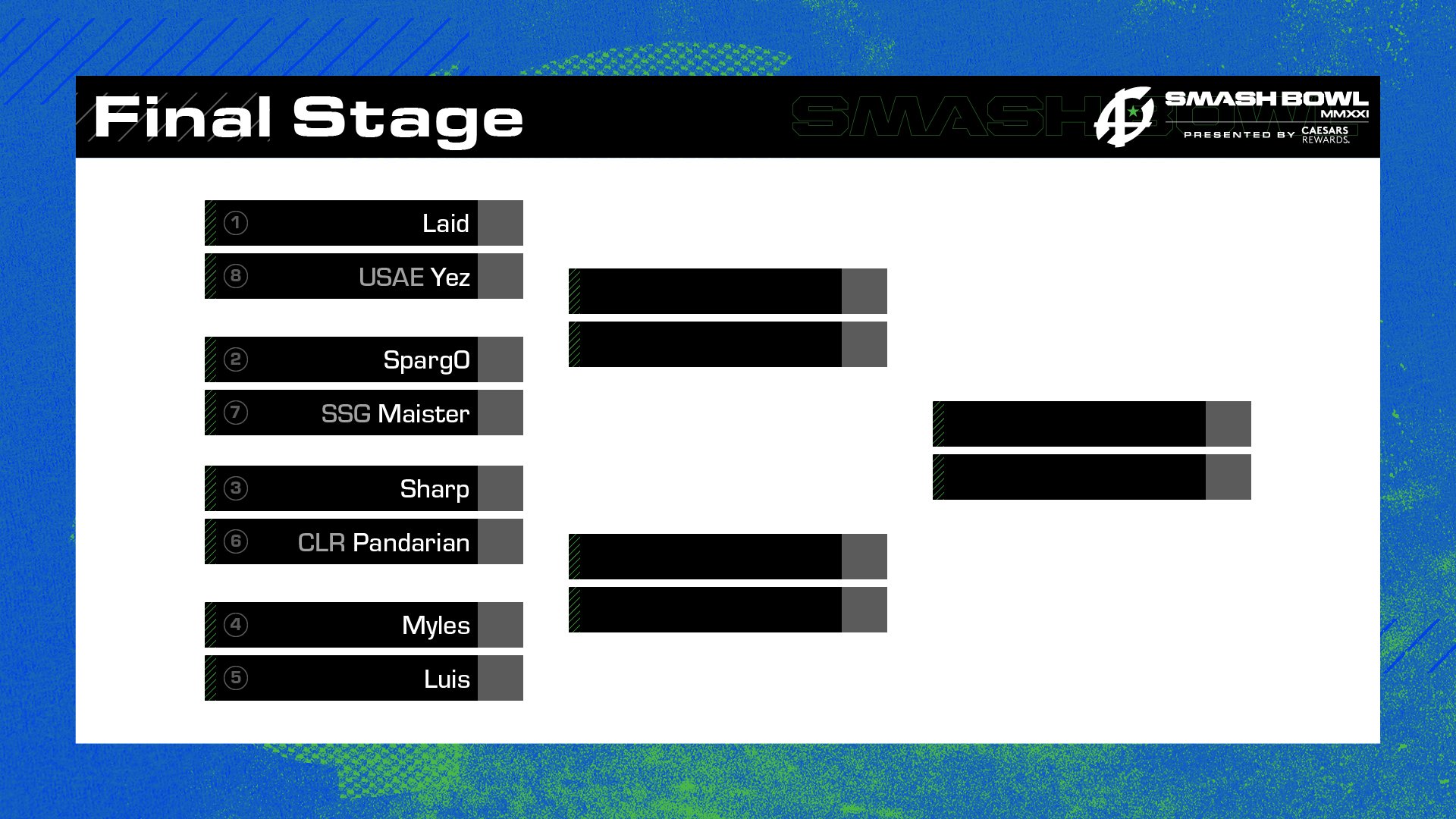 The final stage will work differently than both the previous stages. Rather than taking place in several four-man, double-elimination brackets, the final stage will consist of one eight-man, single-elimination bracket. The players who advanced to the finals stage from the winners’ side of their Stage Two groups will be known as “Haves,” and the players who advanced from the losers’ side will be known as “Have Nots.” The Haves received higher seeds and will choose which ruleset, of the available 16, will be used in their first set. The Have Nots can veto this choice, but after their third veto, the fourth ruleset that the Haves select will be final.

Following round one, the players will enter semi-finals territory. At this point, the standard ruleset will be added to the pool of possible rulesets. Each player will ban eight of the now 17 rulesets. A tournament organizer will then compile those bans, take whatever is left and randomly select the ruleset that will be used for their match. This same procedure will be used for the grand finals match.

You can watch the action Next Sunday, January 31st at 4 p.m. ET/1 p.m. PT on Thunder Gaming’s Twitch channel: https://www.twitch.tv/thundergamingla. 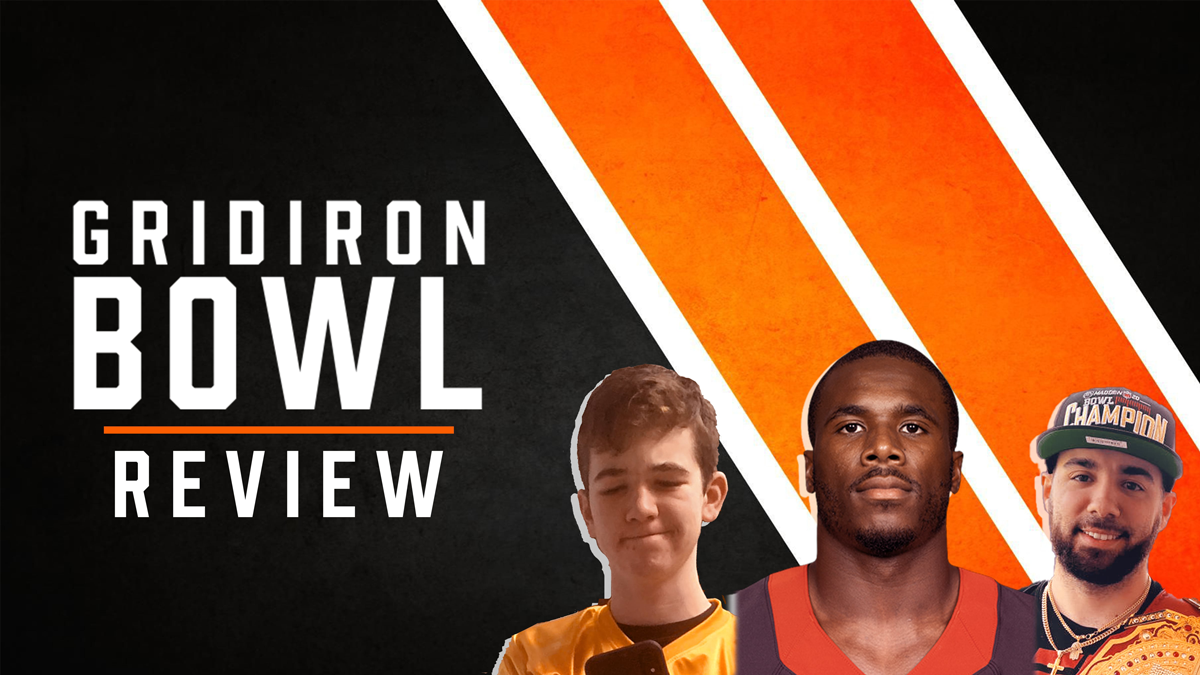 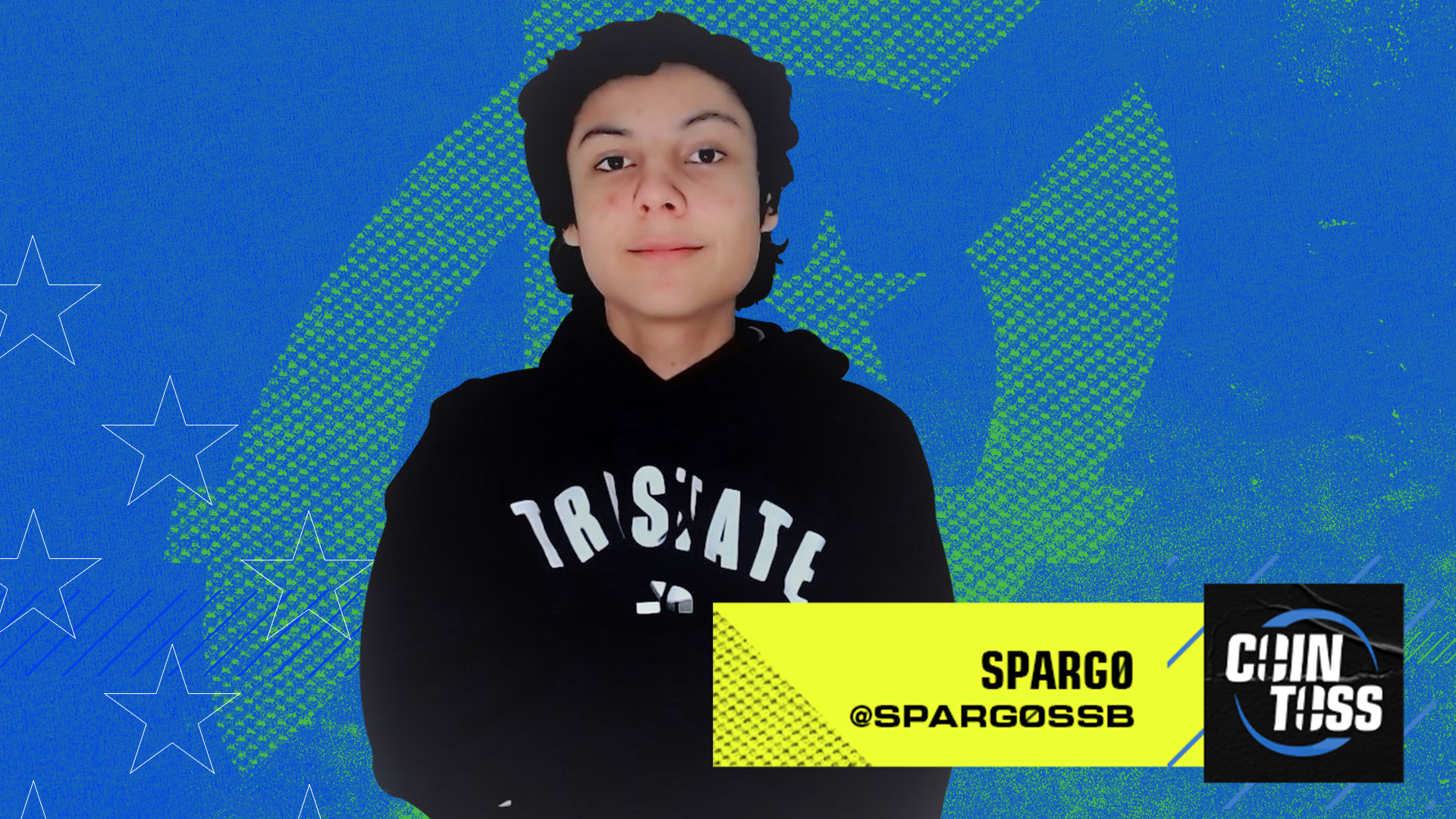 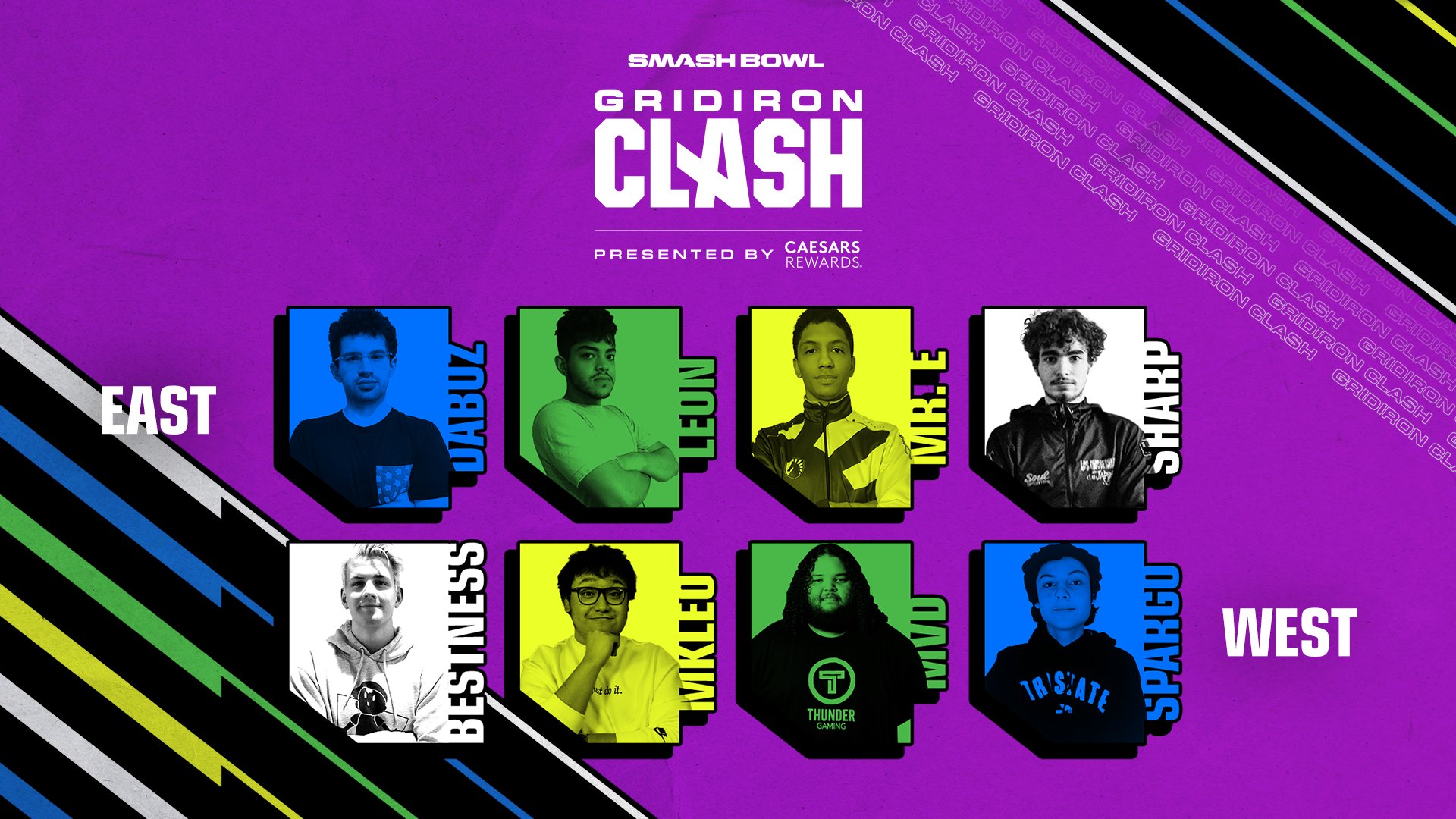